Back in the 1990s, when I first came to live in Amsterdam, it was my ideal city. It had the charm and easy life of a village, yet the cultural whack of an international metropolis.

Most of all it had a quirky, creative, inventive, rebellious core. All manner of people were tumbled together in a tiny canal-enclosed patch: an edgy, idiosyncratic mix quite unlike any city I knew. In the past five or six years, all that has changed.

Tourist numbers have risen stratospherically. Parts of Amsterdam are now so crowded – day in day out, in all seasons – that it is as if the city is constantly in the grip of an enormous festival. Pedestrians spill from narrow pavements and walk in the middle of the street.

Cycle lanes fill with riders who have not been on a bike since they were at school, two or three abreast, wobbling along looking at the sights and infuriating people going about their daily lives. The sedate charm of Amsterdam has been engulfed.

The surge is fatally poisoning what attracted people to the city in the first place. Once, friends visiting me in Amsterdam wished that they could come here permanently. Some weeks ago, I overheard a visitor say: “It’s a great town, but I’d hate to live here. So many people.” 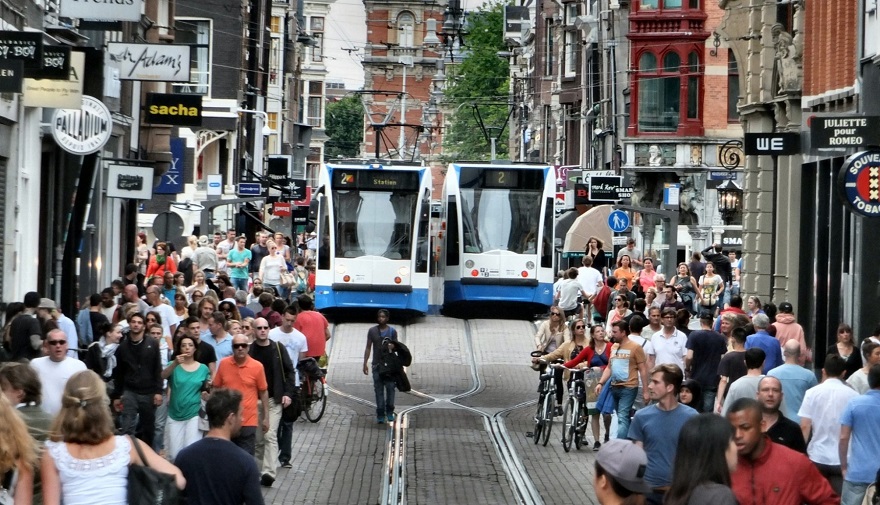 An erosion of rent-control is destroying a social mix that has existed in the city centre for centuries (grand families in the canal mansions, everyone else in the streets in between); an explosion of private holiday lets and in the numbers of hotel rooms is changing the feel and fabric of whole neighbourhoods.

Soon only the rich will be able to afford to live in the centre, sharing the space with a transitory population of tourists and short-term lets. Amsterdam will be ironed out, homogenized.

Cosy neighbourhood cafés frequented by regulars will be a thing of the past; that quirky mix that was once the heart of Amsterdam, banished. Already, Amsterdammers wanting to meet spontaneously find their favourite restaurant or café full. Waiters and shop assistants often greet you first in English (great for tourists, grating to locals).

Rising rents mean that quarters like the Negen Straatjes (nine alleys between the main canals), once a place of odd speciality shops (one selling only buttons, a doll doctor, one crammed with Sixties electrical equipment) are now the realm of high-end boutiques, brand flagship stores and hipster cafés.

Elsewhere, neighbourhood stores have given way to tourist-oriented cheese shops, waffle and Nutella bars, and fast-food joints. I wonder if Amsterdam is not heading the same way as Venice: a city that exists for its tourists, with all but a few locals having fled.

Let’s face it: overtourism is a form of pollution, both social and environmental. In the same way that we have to reconsider attitudes to a factory that may be good for the economy, but is pouring poisons into a river, we need to rethink ways in which tourism is managed and how we, as tourists, behave.

The City of Amsterdam is taking some measures to redistribute visitor focal points, curb private lets and cut down on the more disruptive elements such as Segway tours and beer bicycles, but the fundamental issue is a more difficult one. It is a question of what is more important to the very being of a city – citizens’ quality of life or economic prosperity, and the complexities of how these two interrelate.

Meanwhile, for the visitor to Amsterdam the immediate answer is perhaps in the small things: to proceed with sensitivity; don’t party in the apartment you’ve let, next door to neighbours who have to work the next day; be aware, if you have to walk in the street that it is a street, and that cars and bicycles are trying to pass; try not to go around in large groups.

Most of all, give room to Amsterdam to be itself, and exist for Amsterdammers as well. That won’t solve Amsterdam’s problem, but it will ease the way to an answer being found.

Bali will reopen for Tourists in October 2021, says Indonesian Government

Photographer Follows His Girlfriend Around India, And Captures A Unique View Of Its Mystical Beauty